The end, my friend.

This blog is no longer active. It documented the Litter Mob's work in Prospect Park's woods from May 2011 to May 2012.

By convening the Mob had hoped to encourage a change in the park management's approach to looking after these woods: a dedicated conserving presence, a budget for maintenance rather than purely for capital improvement. That has not happened. I do not see volunteers as the answer to problems that are structural. Support yes, solution, no. I know money is tight. I just have different ideas of how to spend it.

The blame cannot all be laid at the feet of the Propect Park Alliance, the not for profit that helps the city run its park. The City of New York should be funding the parks that serve its people.

The litter and the cruising activities that generate it continue. The last woods in Brooklyn remain underserved. 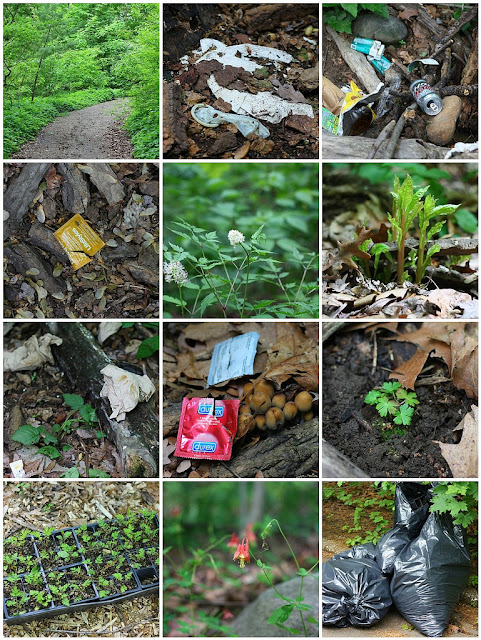 What we found, did and saw during the Last Mob

The first Prospect Park Litter Mob was held on May 10th, 2011. We wrapped up one year of litter pick up and forest restoration yesterday, on May 8th.

The weather is warmer and so cruising activities have picked up again. At the foot of grand old trees on the flats a lot more condoms and soiled tissues have accumulated. The Slope was the scene of several parties - lots of liquor bottles, Newport Light boxes and cigar wrappers. A lone dripping condom, hanging from a branch.

I started the Litter Mob in anger. The layers and layers of litter that I found in these woods in late 2010 were an eloquent sign, to me, that nobody gave a damn. Let them litter, we don't care. Or, We will litter, because they don't care. 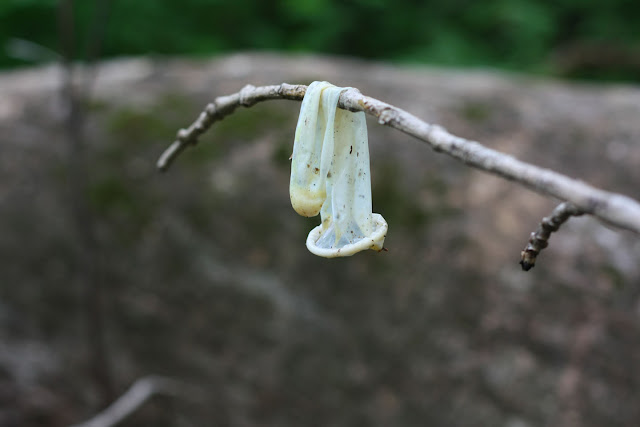 A condom on The Slope

Then, I was surprised that no team of parks cleaners patrolled the woods on a regular basis.

Now, I am still surprised that no team of parks cleaners patrols on a regular basis. And I am not talking about driving by in a truck and tipping out one trash can. I mean on foot, with grabbers. A presence in the woods.

I have heard two justifications for this:

1. It would be demeaning to expect workers to pick up litter and nothing else.
2. We don't have the money.

I see people sitting around a lot. In the complicated strata of workers in the park there are people who -  in order to continue to qualify for welfare checks - are required to put in some hours here, working. Mostly I see them at the bathrooms where I try to wash my hands after the Mob; the bathrooms where there is never any soap the dispensers (There was no soap yesterday, either). Why insult people by not expecting them to work? Here is a workforce available. How it is managed or motivated I couldn't tell you. Poor management and poor morale seem to be a big issue, in general. I am beginning to wonder how work is defined. To me, it means action. Physical movement. Lifting and carrying and dragging. Results. I see a lot of resting, at all levels.

You cannot have a park and not remove its litter. That is maintenance.

In our year's work (a mere 3 hours every other week. How hard is that to duplicate?) we have removed all those sedimentary layers. Our current work was to remove the previous two weeks'-worth of litter. 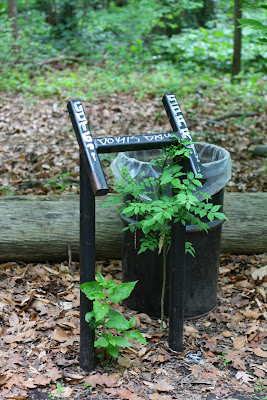 Empty wildfower sign (they were defaced years ago and removed)

The best work we did -  in tandem with litter removal (which is about quality of life and morale) - was light woodland restoration: Planting perennials in pockets, removing invasive species which choke them out, restoring paths and putting up fences to protect - temporarily - trees.

So, what is my wishlist? Well, since you ask (and we spoke about this in summer with the Director of Government and Community Affairs):

1. A team to patrol the woods once a week on foot for litter.

2. A Keeper of the Woods - or a Zone Gardener, a la Central Park - to be appointed, to manage ongoing forest restoration and preservation. This person would be a qualified woodland botanist or ecologist. Suits are in charge of this park, and while businesspeople are necessarily charged with and qualified to raise money they have poor  appreciation and understanding of the nature of a forest and its unique challenges. And it shows.

3. Restored or new signs in the forest, directing visitors to native wildflowers, trees, and birds and explaining forest ecology: the groundwork for open air classrooms. These woods are uniquely placed to be the best outdoor classroom in the most populous Borough of New York City. If people are invited into the woods for a positive reason, their presence there will make the forest unconducive for the sex that produces all the litter. 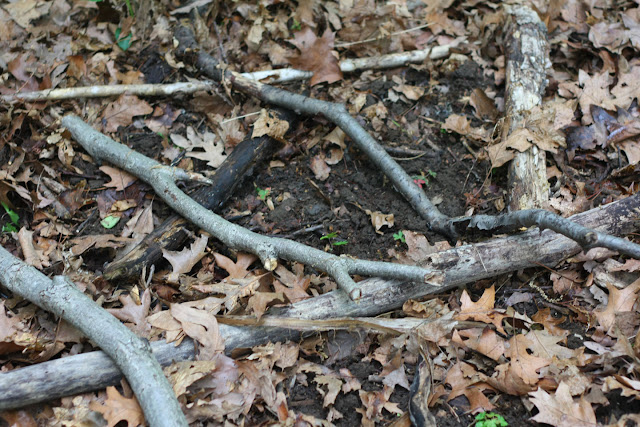 So, there it is. I had hoped that a year of our presence, with steady and time-consuming media and community outreach, would lead to some response in kind from the Alliance. There was a squandered opportunity here for some real change and some good press. I know their attentions were elsewhere, with the 74-plus million dollar ice rink, but the goodwill and attention we generated could have been harnessed to produce something lasting. Instead, we came and went like sunshine and shadow in the forest.

I have not mentioned Money, which is always the most cited reason for a lack of movement. Personally, I believe that better resource management could clear up a host of ills, without spending more.  But I can't dismiss funding. For that we need to turn our eyes towards our Mayor. Why does the City not give more money to its two most famous parks? New York benefits from them. But they are funded by private sources, not by the City of New York.  The Alliance does not have the money it requires for running this park.

Mr. Mayor: Give Prospect Park money. It's our money, after all. Really, Mr. Mayor. Give it back. 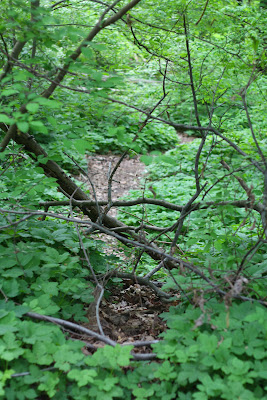 I loved my year in the park. It made me mad, it made more aware of the seasons in a forest in the city, it taught me how to crib a path, it introduced me to good people - fellow volunteers, park employees, bloggers and journalists. We were written up in The New York Times! It prompted me to get my Hepatitis vaccinations. But I am the angry volunteer, not content to labor in perpetuity. I was hoping for lasting results, inspired by a little momentum from us but initiated by the people who are paid to look after the park. I was disappointed.

Maybe that will change. You never know.  I like good news and good stories. Just give me a reason to write one.

Thanks to Franck, Frank, Inge and David.

[And here are Franks' thoughts on Leaving the Woods]
Posted by Marie at 3:56 PM 3 comments:

Email ThisBlogThis!Share to TwitterShare to FacebookShare to Pinterest
Labels: The End


I remember a cartoon by Gary Larson that depicted a safari-outfitted tourist at the edge of the woods. In front of him stood a bear with a broom, and above the bear a sign, edged with lights, that read The Woods. The bear instructed the man - one: we're closed, and two: we don't like your kind here anyway.

The woods cannot be closed, and the truth is that the woods are there for us. As one of Olmsted's and New York's finest works, we should cherish Prospect Park. And we cannot do this without feeling for the forest. In talking with WCBS radio today about the demise of this group of litter gatherers, I realized what is the most important task for all of us - to preserve the woods.

I've often talked with people about our cultural bias against the woods, any woods. On a warm day you can see the evidence of this firsthand -thousands upon thousands of people enjoying the greensward we call the Long Meadow, but hardly a soul in the woodlands. That grassy meadow would not feel the same, would not carry the intentions of Olmsted himself, however, if it weren't for the woodlands he designed to surround it. In other words, the woods defines the Long Meadow, and without it, we lose the essence of Olmsted's design. Try to imagine that glorious green lawn bounded with newly planted, ten-foot tall trees, or with no trees at all.

Prospect Park's woodlands are in danger. Several windstorms over the last 5 years have toppled several of the largest trees. Erosion from heavy rains on morainic slopes has undermined the foundation of a great woodland. Invasive weeds have moved into disrupted habitats. All of these combined is enough to threaten the health of Prospect Park's woodlands, but none alone challenge the future of them more than the trampling and disturbance caused by people regularly traveling and standing off trail. All these threats combined create a scenario of decline that we hope to stem, but feel discouraged from achieving. We understand that for the woodlands to remain healthy and viable, at a reasonable cost, we need the forest to regenerate itself. For that we need more than litter mobbing.

The discontinuation of Marie's volunteer group is not an act of hopelessness, it's a wake up call. The future of Prospect Park requires us, all of us.