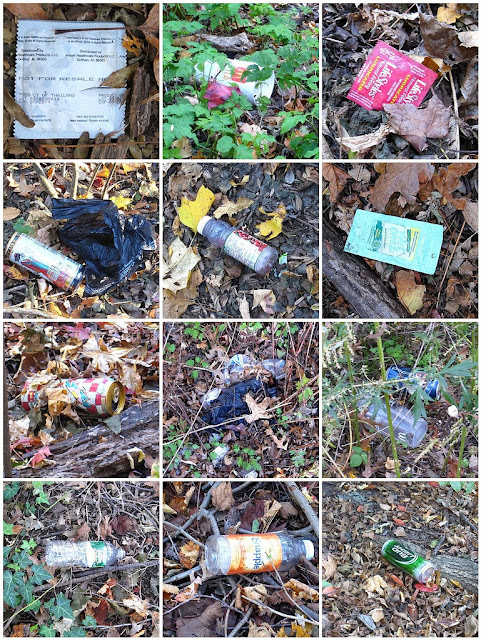 This is a small sample of the dozens of pictures of trash that I took on my walk with Vincent in Prospect Park, on the Northeast side of the park. Why did I take them? Because it was there. Everywhere. I know that a certain amount of litter is inevitable, but this is a plague.

There is no similar plague in Central Park. I am a park rat and I know.

This is a gorgeous part of the park, with woods, valleys, ridges. The trees are stunning.  See the idyllic post, for the rose-tinted view.

But the litter...Most of what I am going off about is in the woods to the east, beside East Drive, on its western edge, and south and east of the zoo. Parts of that area, on the east side of the drive, especially, are entirely neglected. The other side is maintained in the sense that the paths are kept up, with nice low-slung wood barriers that are much more attractive than the metal fencing in the Nethermead, but trash is allowed to accumulate along the edges and is scattered everywhere in the woods. And every tenth step yields a condom.

I associate the litter with the continuous traffic of solitary men in this area, apparently a steady cruising ground. Maybe the litter came first and they, er, came second, or vice versa. I would take cruising without litter any day over litter and no cruising.

Gather it when you visit, in an extra bag, like the woman with two small children I saw recently. She does it every time she's there. She leaves the full bags on the path. I wonder how many condoms they bagged. But it helps, and is the way of least resistance and minimal confrontation.

Or hand the bag to a parks employee, saying, Here, gift for you. They may or may not be part of the problem - there are very few trashcans and I have never seen a ranger here, but the message will perhaps start to trickle through.

Complain.  Complain to the cops, if you see them. Occasionally they patrol on the paths. Littering is an offence. Don't they have a ticket quota? I know how I sound.

Complain to parks employees, who may roll their eyes and say that they are not park housekeepers. But aren't they? Yes, I know that piggish people are responsible for the litter, but this is a public park. Surely there is a strategy for dealing with the inevitable. What is it?

Complain to Adrian Benepe, the Commissioner of Parks. He's in charge. He's a nice guy. But maybe he doesn't know. Yet Prospect Park is kind of famous. Why is this part of the park being neglected? Why is this OK?

Here is a form to fill out and submit to him.

I've sent two and have heard nothing after three weeks. So good luck.

I hate litter. It's a bad sign. Neglect and apathy are catching.

Email ThisBlogThis!Share to TwitterShare to FacebookShare to Pinterest
Labels: How it all started
Newer Posts Home
Subscribe to: Posts (Atom)