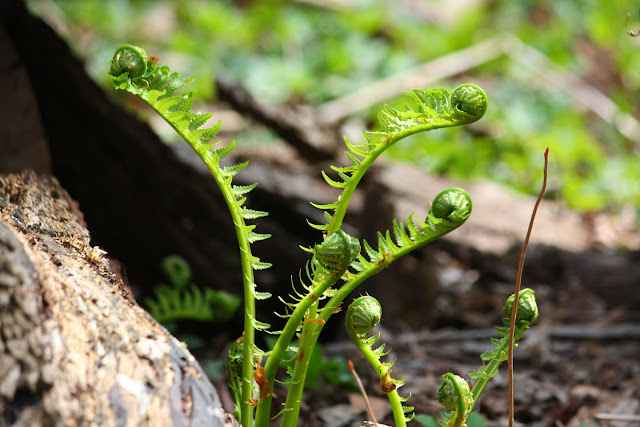 ...where the solitary men walk or stand, or strew their condom wrappers, new ferns are emerging.

About those woods and my rant and my call to arms. Today I received a response from The prospect Park Alliance to my letters the Parks Department, regarding the litter and nature of the litter in these woodlands of Prospect Park. Administrator Emily Lloyd addressed nothing by name, except to call "prohibited" the "activities" that generate the litter, and that this will be addressed this by the erection of signs saying Park Closes at Sunset.

Yup, I'm sure that will solve the problem!

She also reiterates that the landscape crew is small and works without garbage trucks in the woodland areas. I don't see this as a handicap. Two hands, two legs, one bag, plus a stick to pick up trash?

On the other hand, the letter also said that a new volunteer group will be focusing on these woods* (did my nagging work?!), so yours truly will be calling and signing up. I will post more information when I have it.

*Update:  This is actually incorrect. Although the letter did state that a new group would be formed - with nothing finalised as yet - a phone call with Eric Landauer, the Director of Government and Community Affairs, just received, clarified this: Mr Landauer said that there are no concrete plans to create such a group but that Parks is open to creating one. At the moment there is a Monday group in The Vale of Cashmere, next door, and a general Weekend Woodland Warriors (!) group targeting all wooded areas of park, and not clean up- specifically. No one, he said, is required to pick up 'that kind' of litter.

I met some volunteers in the Vale of Cashmere on Monday and was impressed by the work they were doing. It was actual work involving shovels. The woodlands in question were also cleaner than they had been a month ago.

In the end it seems that I do not have it in me to wage a war on all fronts with city bureaucracy. Nor have I the never-ending fire in the belly to take on an unpaid job that requires all-out coordination. I  considered it seriously, read a lot, and then lay down and died, bones in the light.

In that, I have failed. Because the root of the problem remains. Chronic underfunding of public parks coupled with chronic lack of initiative. Says the person who went pins up once she realized just how many rocks would have to be pushed uphill to get something done. I don't believe that volunteering (whether it's donating money or hours) should be the perennial band aid to big city issues. And in this country it is. I want government involvement in my daily life. I want funding for the arts and for parks and for hospitals and for education and for libraries and for fire departments.

Yet it is easier to volunteer than to change policy.

And that is why the problem will not go away.

Many thanks to the people who responded last month saying they would be interested in helping de-litter the woods. I shall post details about this effort as I have them. If you would like to help return these woods to themselves, please leave a comment with your email,  or contact me via my profile photo in the sidebar of the blog.

Update: I will be attending an information session at Litchfield Villa, 95 Prospect Place, on April 27th at 6.30pm, to which prospective volunteers are invited. My hope is still to have Parks focus on these woods. I can't help laughing about these exchanges today, as everyone is taking pains to avoid the following words: sex, cruising, condoms. I suppose it is a political minefield for anyone involved in PR. Yet it is what it is.
Posted by Marie at 4:05 PM No comments:

Email ThisBlogThis!Share to TwitterShare to FacebookShare to Pinterest
Labels: How it all started
Newer Posts Older Posts Home
Subscribe to: Posts (Atom)