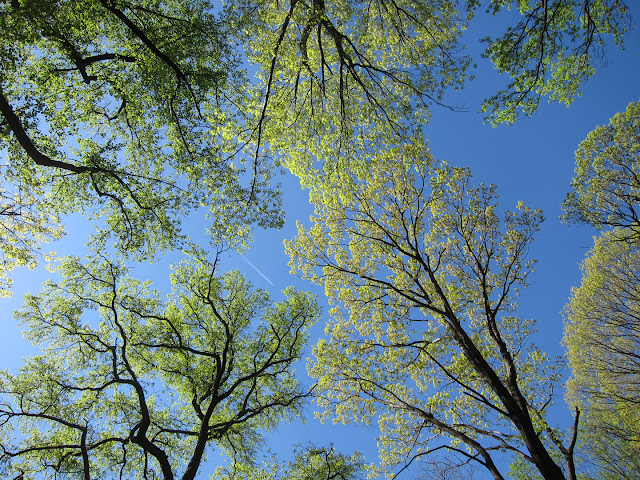 [POSTPONED ON ACCOUNT OF RAIN: rain date is May 8]

The Last Litter Mob, No. 25, will be held tomorrow, May 1st, in the woods on the eastern side of Prospect Park.

We start at 9am and work till noon.

It will be a beautiful day. We promise lots of litter, gorgeous trees and subject-appropriate humour. 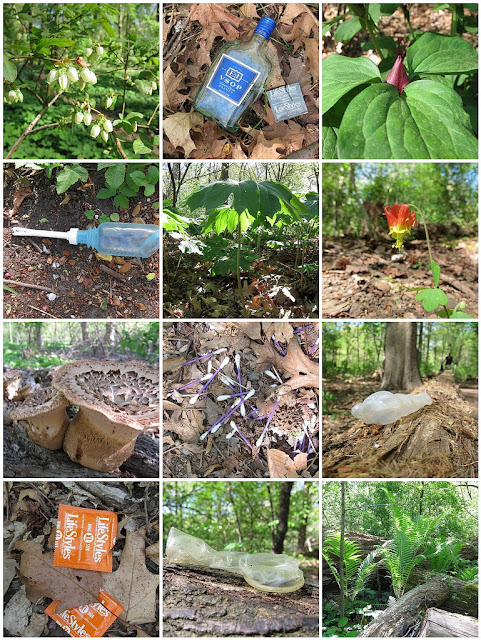 We found, in the course of our 24th Litter Mob:

Blueberry flowers, brandy bottles and condoms, trillium, an enema bottle, May apples, columbines, dryads' saddles (the mushroom), earbuds, condoms, condom wrappers, more condoms, and ostrich ferns. Also a lot of human kaka and underpants and more condoms and wrappers and wet wipes, and energy drinks and many malt liquor bottles and a glamour shot of a half clad man and drinks cans and gum and cigar wrappers drug baggies and empty cups and plastic bags and gorgeous, newly leafed trees and woodpeckers and songbirds and hawthorn blossom and field garlic and a ton of mulch.

The pale green-leafed woods provide welcome cover for the men who travel here to have sex, and it was clear that the pace of action had picked up. Only for trash bags were available that day, so once we filled them we broke for some much strewing. That post here.

Thanks to Inge, Franck, Frank and David.


The next, and last, Litter Mob will take place on May 1st. May Day, Workers Day, at 9am. 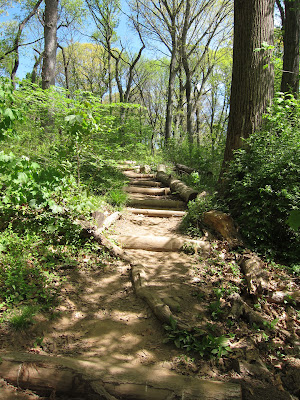 Here is the path we cribbed (layed logs across, to prevent erosion) some weeks ago. The one the Brooklyn Paper dubbed The Pathway to Pleasure. As unimpressed as we were with the lousy article, the name has stuck. Last Tuesday - our 24th Litter Mob, and almost one year since we started - David, a member of the Prospect Park Alliance's Natural Resources Crew, and known on this blog as Our Learned Leader, suggested we mulch it. Mulch makes for nice woodland. It encourages plants to grow in from the sides, too, narrowing this wide, ad hoc path. And, it looks purdy.

Course, some wheelbarrows would have been nice. It is a hill, and mulch is heavy. But apparently they were sequestered elsewhere. I had been asked the previous week if the Mob might assist this Tuesday instead with other plantings attached to the multi-million dollar (74, 000,000 and counting)  ice rink that is being built, and I had demurred. It's important to me that we focus on the woods. Prospect Park seems to be fraying at the seams and at its core and staying on target in this woodland is one way to keep track of progress, or the lack thereof. Spreading thinly just keeps the wound bleeding. I'd rather staunch the place we have chosen. And really. No matter what the justification - all those millions and you still need us to plant the damn thing?

The disarray is getting to me. The Parks Department, City of New York, that is, is letting go of more and more responsibility for the green spaces that make it proud, and which provide a tonic for its citizens. The Prospect Park Alliance (private, not for profit) has too little money to run a park of this size, but is expected to. And, very importantly, I think morale is shot. From my imperfectly clairvoyant and informed point of view mismanagement is a big factor, too. I believe in old fashioned elbow grease. A work ethic. Actual work. Not pushing paper around. I can hear paper rustling.

Take the employed bodies in that park on any given day and actually get the whole body to work? Then you'd see something. Marvelous.

In my neighbourhood, which still has some Italians left in it, I was taught the saying that the fish stinks from the head down. How true is it? Don't know. I think fish can begin stinking anywhere. But the stink is catchy. I am beginning to sniff myself suspiciously. I am tired of working for and worrying about a park where I don't see anything reciprocal to reward the voluntary labour. I don't want certificates from the president of the Borough of Brooklyn, or Tshirts or baseball caps or brunches. Save your money. Show me something else. Real. A willingness to chip in and match our effort and change the fact that unless we have people working for free in a crucial natural habitat of the park and the city, it will turn into a cesspit.

How much will it really cost to erect the wildflower signs, the biodiversity signs...to plant more perennials, to address the littering men in the woods? To fetch their freakin' litter?

We are not actually achieving anything. We are simply treading muddy water.

So, no wheelbarrows, I felt punished. Strong French Franck toted most of the mulch up that hill (below), boosted every now and then by Inge or me, or David, and at one point falling under the wheels of the blasted little cart we did have to play with. All we needed was little red beach spades. 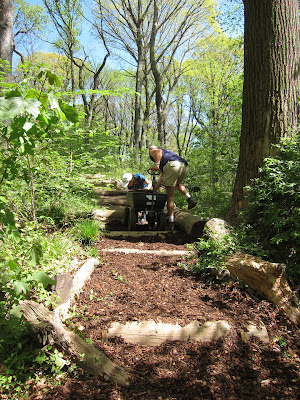 I am the angry volunteer. I am mad. My own Frenchman tells me that this is because I am less a volunteer than an activist. If I am, I have failed. It has been a year since we have started, inspired by the sedimentary layers of litter detritus we discovered in the autumn of 2010. I had hoped, naively perhaps, for a small sea change. In attitude. A show of faith: If you guys do this we'll consider doing that.

The woods need more than I can give at this point. They need a material investment of faith by their bona fide custodians.

I am speaking for myself alone. The members of the small band of regular volunteers who made our every-other-Tuesdays possible each have their own reason for showing up. And they will probably show up to other volunteer efforts if the Litter Mob, whose domain is Prospect Park's Midwood,  folds. Or perhaps they will carry on.

But I am not sure that I can, or want to. 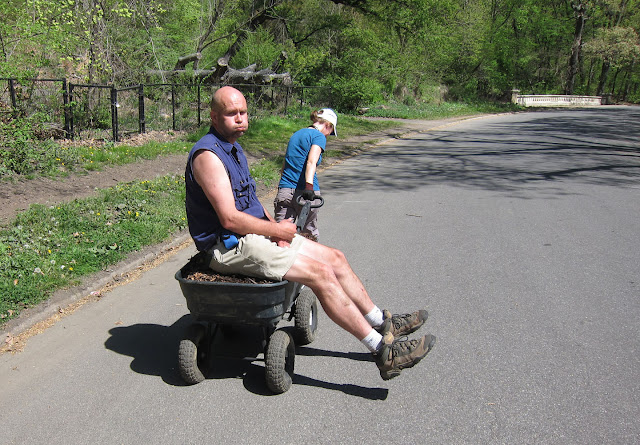 I love seeing the woods twice  a month. I know them well, now. I like them more than ever. I know where what blooms when. I expect the high drill of the woodpecker, the sudden squeak of the spring chipmunks. The hateful patches of soiled condoms and shitty tissue and trash trash trash. The lace of pale leaves in April, sunshine streaming through the high branches, the empty fretwork of winter. I'd like to keep going back. I enjoy the camaraderie, the feeling that I've made a difference.

But it is not sustainable. Effort should be met, halfway. Unless you are a saint, and that I am not. 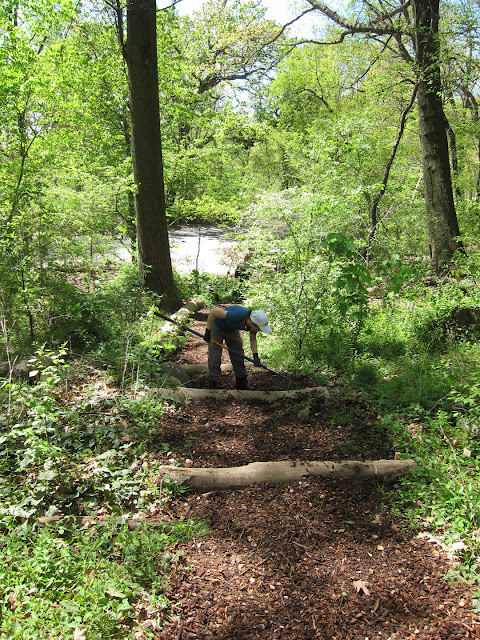 I was out of commission for the 23rd Litter Mob. My first sick day. David, our Learned Leader, suggested it was shame at having helped create the pathway to pleasure - The Brooklyn Paper's headline a couple of weeks ago. Mob fatigue. But I have the sniffles.

Elizabeth and Franck were on site, though, and were followed by Columbia University documentary film student Nathan Vickers, who intends returning for some more material.

Here is the video he made of the Litter Mob in this first week of April. It's great to hear voices other than my own, for a change.

Litter Mob 23 saw the usual trash, as well as some more planting of native Rubus (blackberry) on The Slope.
Posted by Marie at 12:21 PM No comments: